This is a map of ancient bible city Laodicea in Denizli, Turkey showing the location, geography and buildings. This is your ancient map guide and all the information you need. The map shows Laodicea’s location and ancient information such as the ancient attractions in Laodicea. Click on the map to view it in full resolution. 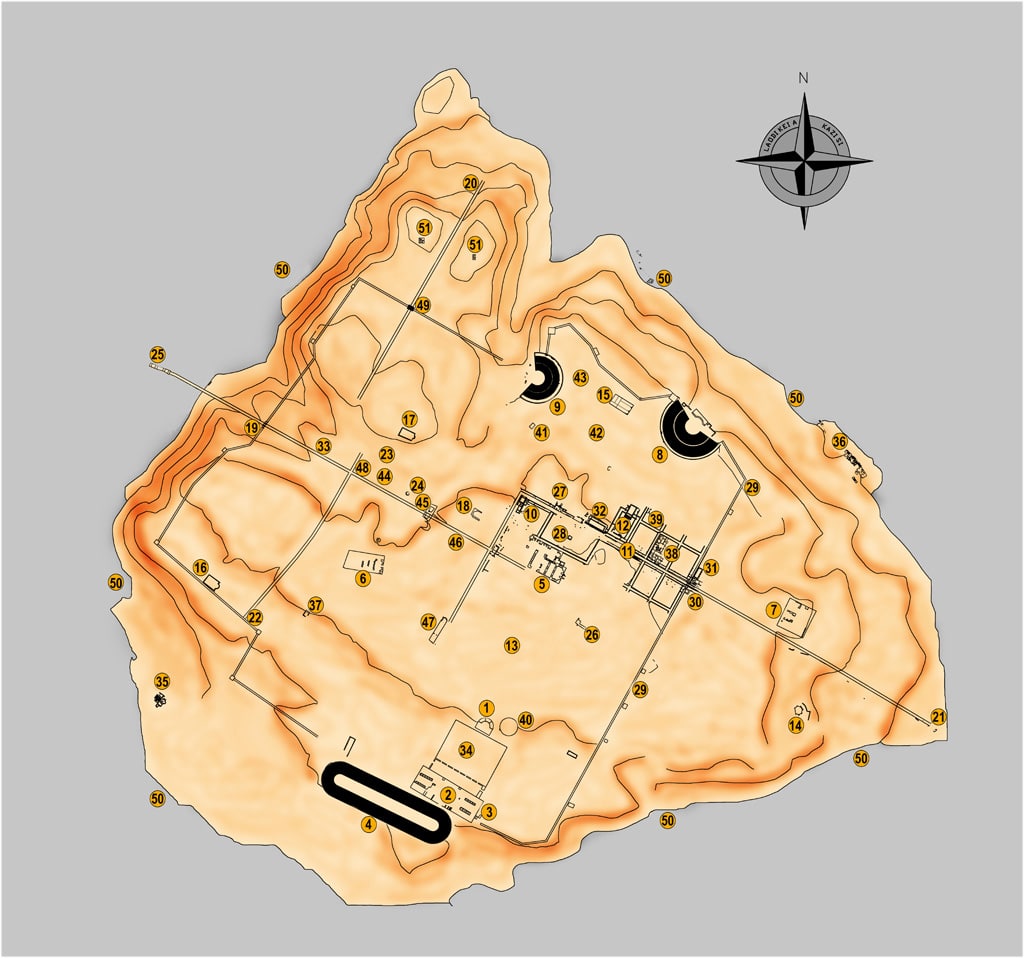 The Buildings of Laodicea

The city of Laodicea has a large number of monuments that were built in the city with the contributions from the residents. Big and small theatres, stadium, gymnasium, assembly building, Zeus Temple, church and recently discovered streets prove the strong fancy of Laodicea residents for sports and arts. Laodicea became known as the only ancient city having the longest stadium and two theatres in Anatolia as can be seen on the map.

A Big Theatre
It is constructed in the north-east of the archaic city, in the Greek theatre type and in the Roman style in compliance with the area. Its scene is completely destroyed and its cavea and orchestra are in good condition. It has a capacity of approximately 20.000 persons.

A Small Theatre
It is 300 m north-western of the Big theatre. It is constructed in Roman style in compliance with the area in Greek type. Its scene is completely destroyed and there are damages in its cavea and orchestra. It has a capacity of approximately 15.000 persons.

A Stadium and the Gymnasium
It lies in the south-western direction of the city. The additional buildings and gymnasium are constructed so as to constitute a whole. The length of the stadium constructed in 79 AD is 350 m and its width is 60 m. The building, which is constructed in the form of a amphitheatre has 24 – step sitting lines. A big part of it is destroyed. An inscription indicating that the gymnasium was constructed in the 2nd century AD by proconsul Gargilius Antioius and devoted to Emperor Hadrianus and his wife Sabina.

A Monumental Fountain
It is located at the corner of the main street and secondary street of the city. It is made so as to have two sides. It has niches. It has been repaired in Byzantine Period.

An Assembly Building
It is in the south-west of the city. The monumental building having a rectangular plan lies in the east – west position. The main entrance is at the eastern side. It is constructed with the arch and vault system starting from the entrance. The upper parts of the building have been destroyed completely and the bearer elements have been destroyed partially.

The Zeus Temple
It is in the eastern part of the street with columns of archaic Laodicea city and between the small theatre and nymphaeum. But only parts of the ornamental elements can be seen.

A Church
It is constructed in the south of the street with columns, near the street. Only a part of the bearer parts are not damaged. Its main entrance is in the western side. In the middle part, eight pillars, four of which are arched and four of which are flat, were used.