Denizli is the commercial and transportation hub of inland region of southeastern Aegean Turkey. It is nestled against the hillside at the southern side of the plains of Buyuk Menderes River. It’s a busy place partly because of nearby Pamukkale and its travertine pools, but mainly because it’s the main commercial hub for the agricultural produce coming from the region. This page will provide a travel guide and information for Denizli and other local town like Pamukkale, Karahayit and Laodicea.

By bus from major cities

There are busses every day from Istanbul to Denizli. Other cities are to and from Nevsehir (for Goreme), Antalya, Adana, Fethiye, Diyarbakir, Izmir and Selcuk (for Ephesus). The extensive, reliable, and almost always on time Turkish bus system links Denizli otogar with almost any major city in the country.
When you consider buying a ticket, always try to use the well-known companies. Also, always check your departure time and gate as well as the destination. The agent most probably will not know any word in English so you may need to use body language instead.
The local company, Pamukkale Tourism offers the best options with buses to many cities leaving continuously. However, you could also view all the bus firms’ like Pamukkale, Kamil Koc and Metro Turizm to tour and travel Turkey.

Currently there are trains only from Izmir to the city. The daily Istanbul service (Pamukkale Express) was suspended in 2008 due to track renovations, and it is not certain when/if it will re-start service. Check with Turkish State Railways (TCDD) website for most up-to-date information on this.

The closest airport is Denizli – Cardak Airport (IATA: DNZ, ICAO: LTAY). The national carrier Turkish Airlines now provides three daily flights from Istanbul Ataturk Airport. The times are very early morning, morning, and evening. Denizli Cardak Airport is about one hour outside the actual city of Denizli. There are taxis available at the airport, but a better option is taking the havas. The havas is a bus that goes only between the airport and the city for every flight. It currently costs 15 YTL (€7,- or $9,-). If you are going to Pamukkale, the havas can take you from the airport to a dolmus (minibus) that goes to Pamukkale. Izmir Adnan Menderes Airport or Antalya Airport is another alternative to the area. Denizli is about 260 km from these airports, a drive of about 3 hours by bus.

Getting around in the city

Denizli is not a very big city. You won’t need to use the transportation system very often. Minibuses and buses provide service. There is neither metro nor trams running. Just rely on your foot as the center of the city is so small. If you want to go to the outskirts of the city you can take busses. Every bus has a sign on it stating where it goes and terminates. You can try to ask the driver as well.

In the city of Denizli it’s important to be aware that there is a main bus station called Denizli Otogar. You can take a minibus (also called dolmus in Turkish) from this Denizli Otogar to Pamukkale. They run approximately every 20 minutes and cost one way about 4 Turkish Lira (€1,80 or $2,30). The bus drive will take about 20 minutes. 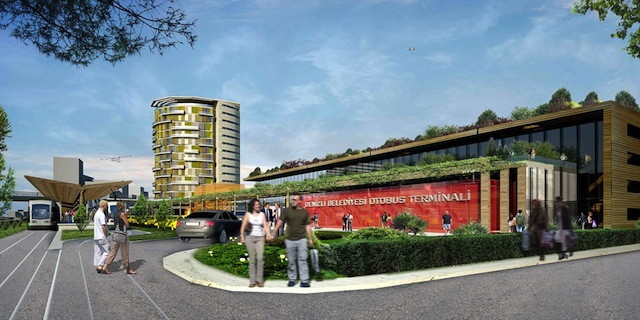