Laodicea on the lycus, Turkey

Laodicea ancient city, also know as Laodicea on the Lycus, Laodicea ad Lycum, Laodiceia or Laodikeia, was founded on 260 B.C. along the Lykos (Curuksu) River located at 6 km from the Denizli city center in Turkey. The city was originally called Diospolis, “City of Zeus“, and afterwards Rhodas. It was founded by Antiochus II Theos, king of Syria, and named in honor of his wife, Laodice (Laodike). 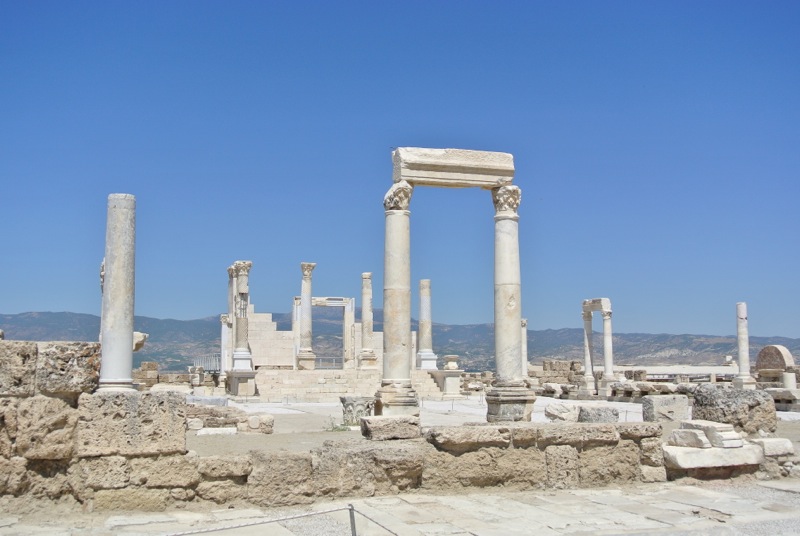 Temple of Zeus in Laodicea

The definition of the name of Laodicea (pronunciation: La·od·i·ce·a) is a mixture Greek word: laos meaning people, nation, or crowd; dike meaning custom, law, judgment, penalty, or punishment, all depending on the context. Therefore most people agree that the founders of Laodicea saw themselves as people of justice or law-abiding people.

The city became part of the kingdom of Pergamon and later passed into Roman hands in 133 B.C. Cicero, the famous Roman orator and statesman, served as governor of the province, residing mostly in Laodicea.

Laodicea was a great center of banking and finance (Rev. 3:14-21). It was one of the wealthiest cities of the ancient world. When Laodicea was destroyed by an earthquake in 60 A.D., they refused aid from the Roman empire and rebuilt the city from their own wealth. “One of the most famous cities of Asia, Laodicea, was in the same year overthrown by an earthquake and without any relief from us recovered itself by its own resources” (Tacitus, Annals, 14:27).

“The city was at the crossroads of north-south traffic between Sardis and Perga and east-west from the Euphrates to Ephesus. Laodicea quickly became a rich city, rich enough to be able to rebuild itself without outside help after the destructive earthquake of 60 A.D. In common with many of the Hellenistic cities there was a prosperous Jewish colony established there well before the Christian era. The city’s reputation was for its money transactions and the good quality of raven-black wool grown in the area.” (Blake and Edmonds, Biblical Sites in Turkey, p. 139-140).

Laodicea was the first city in Anatolia importing textile products made of quality knitting wool to the Roman Empire. Laodicea was also a great center for the manufacturing of clothing – the sheep which grazed around Laodicea were famous for the soft, black wool they produced. Laodicea was also well known for it’s school of medicine.

“One of the principles of medicine at that time was that compound diseases required compound medicines. One of the compounds used for strengthening the ears was made from the spice nard (spikenard? an aromatic plant). Galen says that it was originally made only in Laodicea, although by the second century A.D. it was made in other places also. Galen also described a medicine for the eyes made of Phrygian stone (eye salve). Aristotle spoke of it as a Phrygian powder. Ramsay tries to explain what kind of medicine it was by saying it was not an eye ointment but a cylindrical collyrium that could be powdered and then spread on the part affected. The term used by John in Revelation is the same that Galen uses to describe the preparation of the Phrygian stone. Would not these medicinal concoctions be a reason why John cautions the Laodiceans to buy ‘ointment for your eyes so that you may see’ (Revelation 3:18)?” (Blake and Edmonds, Biblical Sites in Turkey, p. 140).

“The principal deity worshipped in Laodicea was the Phrygian god Men Karou, the Carian Men. In connection with this god’s temple there grew up a famous school of medicine, which followed the teachings of Herophilus (330-250 B.C.) who began administering compound mixtures to his patients on the principle that compound diseases require compound medicines.” (Otto F.A. Meinardus, St. John of Patmos, p. 125).

Two of the doctors from Laodicea were so famous that their names appear on the coins of the city (Zeuxis and Alexander Philalethes).

The hot springs at Hierapolis, just six miles across the Lycus River valley and to the south, are probably what John had in mind when he spoke of lukewarm water (Rev. 3:15-17). No other city on the Lycus Valley was as dependent on external water supplies as Laodicea. Water was also piped in through an aqueduct from Colossae.

“The lukewarmness for which, thanks to this letter, the name of Laodicea has become proverbial, may reflect the condition of the city’s water supply. The water supplied by the spring … was tepid and nauseous by the time it was piped to Laodicea, unlike the therapeutic hot water of Hierapolis or the refreshing cold water of Colossae (Rudwick and Green 1958); hence the Lord’s words, ‘Would that you were cold or hot!'” (The Anchor Bible Dictionary).

“Water piped into Laodicea by aqueduct from the south was so concentrated with minerals that the Roman engineers designed vents, capped by removable stones, so the aqueduct pipes could periodically be cleared of deposits.” (John McRay, Archaeology And The New Testament, p. 248).

Our Lord did not accuse the brethren in Laodicea of apostasy, nor with following some false prophet or engaging in emperor worship. The church is accused of being “lukewarm” — this is the only congregation about which the Lord had nothing good to say!