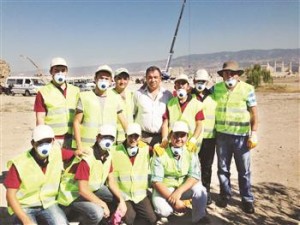 The Denizli Police Department initiated a project to employ young people and presented certificates to 10 young people who completed their archaeological excavation courses.

The project of the Denizli Police Department is initiated for people between the ages of 17 and 21. Within the project, 56 unemployed young people attended courses focusing on skills such as welding, computer operating, wall tile production, ceramics, hairdressing, and began working in various business places.

Considering the fact that the Aegean province of Denizli is home to 19 ancient cities and there is the problem of finding workers in these ancient cities, an archaeological excavation course was also organized. Ten young people finished the course and received their certificates.

At a ceremony held at the Denizli Governor’s Office, Chief of Police Department Zeki Bulut said,” We have initiated this project for young people, who did not finish high school, to have a job. We organized this course with the support of various institutions. Children attended the 600-hour course in the ancient city of Laodicea. They now have a job.”

Denizli Governor Abdülkadir Demir said that the city was an open air museum and archaeological excavations had been ongoing in nine different places. “They will be employed in these excavations,” he said.