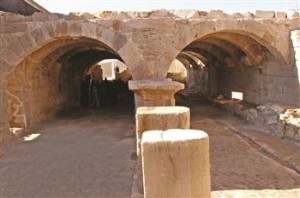 Excavations in the ancient city of Tripolis in Denizli have found a rare find, a covered market bazaar. The site is rare as few other ancient cities have covered bazaars, said Bahadır Duman, an academic at Pamukkale University’s Archaeology Department and the head of the excavation team at the ancient city.

Tripolis was accordingly very valuable for historians and one of the three most important cities in the 2nd century B.C., along with Hierapolis and Laodicea, for trade, textiles and agriculture. The site was however frequently destroyed by earthquakes.

The excavations started in April 2012 digging seven meters deep. The market, which was build 2,000 years ago, spread over an area of 500 square meters.

Year of ancient cities in Denizli

Denizli Gov. Abdülkadir Demir, meanwhile, said 2013 was the year of ancient cities in Denizli, adding that excavation works had started in Laodicea and continued with Hierapolis. The governor also promised more excavations to unearth the architectural treasures of Tripolis. “The values of the city will be excavated and revealed,” he said. The market was not noticed because it had been buried underground, officials said, noting that it would be completely unearthed in 2014. “We found strong structures 3.5 to four meters deep, and one of them was the covered bazaar,” the academic said. “Most parts of the covered bazaar area still remain strong. There are similar structures in the area but they are damaged,” Duman said. “There are also other public buildings and examples of civilian architecture, as well as open bazaar areas, baths, a theater and a very big stadium,” Duman said. The excavations will continue.