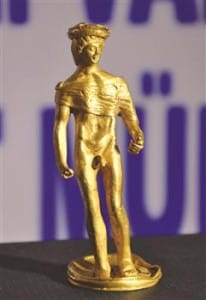 Police in Denizli seized a golden statue from the Roman period from a car in the western province. According to a statement made by the Provincial Security Directorate, within the scope of an operation by the Department of Anti-smuggling and Organized Crime, a car was stopped in Delikliçınar Square and the golden statue was found in the car. The three suspects in the car were taken into custody.

It was reported that the statue, made in image of Zeus’ son Hermes, and its pedestal are from the Roman period. The Pamukkale University Head of Archaeology Department and the ancient city of Laodicea excavations, Professor Celal Şimşek said that the finding was original.