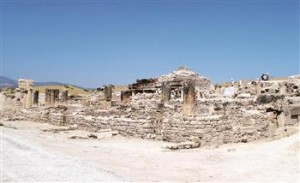 A church, which is in very good condition until its roof level, was found in Tripolis. Its roof will be covered with a wooden material. AA photos

A church that dates back 1,500 years was unearthed during excavations at Tripolis ancient city in Buldan, Denizli (Turkey). The church will open to visitors at the end of the year after being covered with a wooden material just like the original, say officials.

The archaeological excavations have been carried out for two years by Pamukkale University in the Lycian city of Tripolis, which was located at the junction point of Phrygia, Karia and Lydia in the Hellenistic period. The city was surrounded with walls in the early Roman period.

In last year’s excavations, georadar work revealed a marketplace in good condition. This year during excavations next to the marketplace, a church, which is in very good condition until its roof level, was found. The earth in the church has been cleaned and its roof will be covered with a wooden material just like the original before being opened to visitors.

The head of the Tripolis ancient city excavations, Professor Bahadır Duman, said the history of the first settlement place in the ancient city dated back to the Hellenistic period in the 3rd century B.C.

“One of our most important findings in 2013 excavations is this church from the early Byzantium period in the 6th century. But the frescos and icons on the walls of the church show us that worship continued here until the 10th century. The church is in 21 by five meters in size and seven meters in height. Local stones of the region were used in the construction of the church, mostly travertine. The floor covering is made up of marble and travertine. It has three sections, which are the narthex, naos and atrium. We are currently working on the restoration of the church. At the end of this season, we plan to open it,” said Duman.

He said the church remained original aside from its roof. “As roofs were generally wooden in the ancient era, it was unprotected against natural conditions such as erosion and earthquakes, and it collapsed. But we will finish its restoration and revive it. Another significance of the church is that worship continued for 400 years between the 6th and 10th centuries. When compared to other churches in the region, it is a small church but better protected.”

Duman said the walls of the church had figures of Jesus Christ, the Virgin Mary and the 12 apostles. “Iconoclasm existed in Christianity in the 8th and 9th centuries. This structure consists of frescos made in 10th century after the iconoclasm period.”

The church is located on an important route, Duman said. “The ancient city of Philadelphia in Manisa Alaşehir is in the northwest of Tripolis. It is one of the seven churches mentioned in the Bible. One of these churches is also located in Laodicea in 40 kilometer south of our ancient city. Therefore, Tripolis is on the pilgrimage route between these two holy cities. We have found four churches in two years, and this church is one of them. Pilgrims will visit it since it is on the pilgrimage route.”