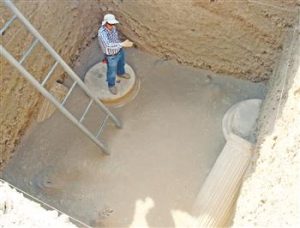 The columned galleries are in a rectangular shape on an area of 35,000 square meters. They were discovered seven meters underground. AA photo

Excavations in the Aegean province of Denizli’s ancient city of Laodicea have revealed 1,900-year-old huge columns seven meters underground. The columns were found in the area known as the northern agora, one of the oldest faith centers in Anatolia.

The head of the excavations, Professor Celal Şimşek, said the northern agora had been discovered last year and they were continuing restoration and conservation work there. He said the area was one of the largest agoras in Anatolia. “The columned galleries here are in a rectangular shape on an area of 35,000 square meters. We previously revived the columned galleries that we call the eastern porch. This year we found the extension of these columns seven meters underground. They were in the same condition as when an earthquake ruined them. The columns date back to 1,900 years ago. Dust erosion and residue have filled the earth here and preserved the columns.”

Şimşek said their goal was to finish the excavations by the end of the year and to revive the columns in the beginning of the next year. He said the ancient city of Laodicea had served as a religious center.
“When the columned galleries are completely unearthed, there will be a very nice touring area. Tourists will have the chance to see traces from the past up close.”