Ancient theater of Hierapolis brought back to life for art performances 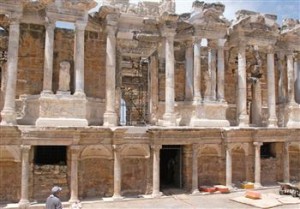 The stage of the ancient theater in the Aegean province of Denizli, which has traces from the Hellenistic era and Christianity, has been renovated. The ancient city of Hierapolis is known for the healing water in its springs. Renovations there started two years ago with the aim of restoring the stage in accordance with its original form. The area, which draws many tourists every year, will be hosting cultural activities from now on.

The governor of Denizli, Abdülkadir Demir, stated that the Hierapolis Ancient Theater was one of the most important historical sites in the Mediterranean region. Demir said that the theater restoration was an important stage in the studies that were started by the Italian excavating commission 56 years ago. “The project was planned more than 50 years ago but somehow it was not completed.”

The restoration of the ancient theater is completed within the amenability of the Excavation Presidency and with the support of the Ministry of Culture and Tourism and the Special Provincial Administration. The theater, built 2,000 years ago, is now accessible as it was before. The columns are built as their original, the stage parts are completed and the missing parts are built in accordance with their original. The theater has a magnificent stage,” said Demir.

Demir pointed out that tourists visit the ancient theater, in particular, when they came to visit the Hierapolis Ancient City near Pamukkale. Every year nearly 2 million visitors came to the city. The constructions have been continuing for many years and as a result there haven’t been any events in the theater previously. Demir stated, “By having many activities in summer time, we are planning to give different options to the tourists visiting the Pamukkale Travertine and Hierapolis Ancient City. Today, the theater is a proper place for concerts with its acoustic. It will be used in different activities in a short time.”

Governor Demir added that it was the 25th year of the Pamukkale Travertine and Hierapolis Ancient City being added onto the list of UNESCO World Heritage sites. He said that they wanted to celebrate this event with splendid ceremonies.

The biggest theater of the basin

The president of the excavation committee of Hierapolis, Archeologist Dr. Rıza Haluk Soner, who is from the Italian University of Lecce, said that this was one of the most well-preserved theaters of Anatolia. The stage in the 2,000-year-old building was ruined in 1957. “We carried out a restoration project and successfully applied it. The original stage had three floors; we only constructed the first floor. This building was constructed by the Emperor Septimius Severus. The height of the three floors is 36 meters. This is a typical example of Roman architecture. The construction style of the back wall is like the Aspendos Theater in Antalya. This theater is the richest theater of Anatolia in terms of arts,” stated Soner.