Laodicea has been added to the UNESCO World Heritage Temporary List

The largest ancient city of Denizli, Laodicea, has been added to the UNESCO World Heritage Temporary List. 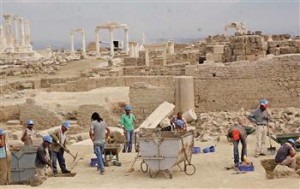 Denizli’s ancient city of Laodicea has been added to the UNESCO’s World Heritage Temporary List. The site had waited for the decision since March. DHA photo

The head of the excavations, Professor Celal Şimşek said the ancient site had been waiting for this moment since March 2013. UNESCO has decided to add the site to the list. The pieces found during latest excavations showed that the history of weaving dated back 4,000 years in Denizli, an area identified with the textile sector in modern Turkey.

The excavations have continued for many years and Şimşek has been the head of the excavations for nine years. “Getting to the list means that they are accepting us,” he added. “There will be many new legislations and regulations,” Şimşek said.

“As far as we have learned from Laodicea, there are three temples in this 250-by-100 meter divine area. One was dedicated to Zeus and to Athena. There is a bust of Athena on a column in the temple. We are still searching for the god of the third temple.”

Laodicea is very important as it contains many clues about the economy and trade in the past.

Şimşek said Laodicea’s city plan might have inspired today’s architects and city planners. “The architecture of social, religious and other buildings in the ancient city was all part of a specific system.”